Welcome to our Silent Witness Against Racial Injustice page.
On June 19, 2020, members of Falls Church Presbyterian, The Falls Church (Episcopal), and Columbia Baptist, along with neighbors and friends, joined together in silent witness to commemorate Juneteenth and demonstrate against racial injustice. The witness did not end on that day. We continue to gather every other week along Broad Street in Falls Church to sustain awareness of racial injustice toward Black lives and all People of Color. Please join us. 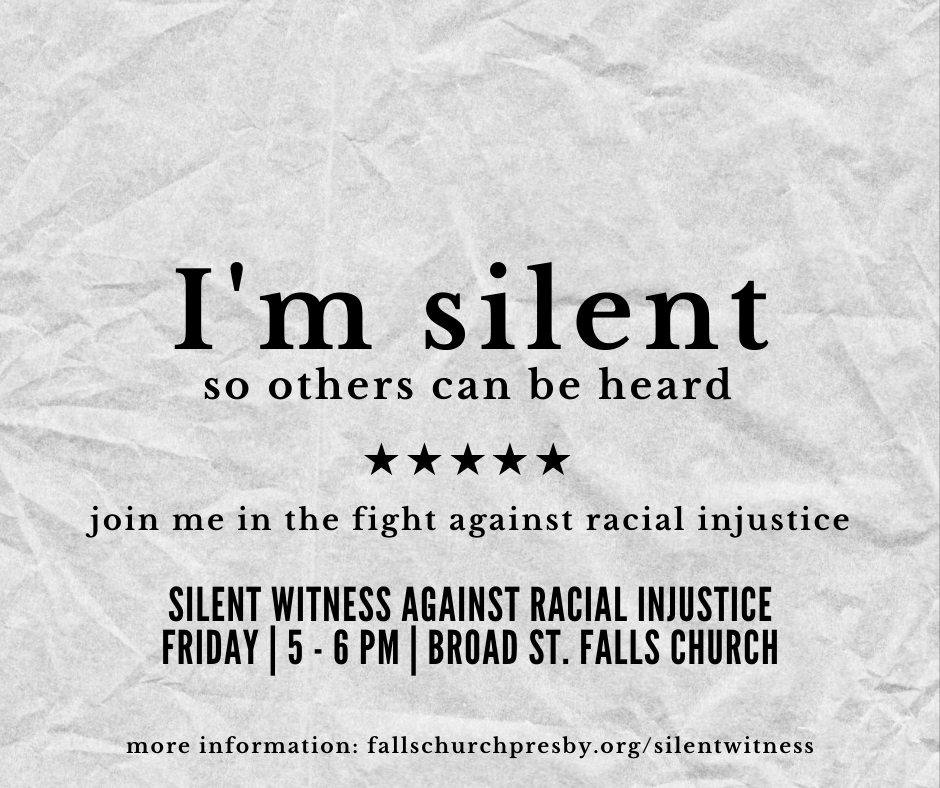 Please join the Falls Church faith community on 25 September 2020, from 5:00 to 6:00 pm along Broad Street, in Silent Witness Against Racial Injustice in the housing market.

While the Fair Housing Act of 1968, 1988, and the Obama Administration’s  “Implementation of the Fair Housing Act’s Discriminatory Effects Standard” (2013) made significant inroads towards reducing discriminatory practices in home sales and mortgage lending, racial injustice persists.  Racial steering–the practice of showing homes in areas of high racial concentration or limiting options to potential homeowners of color–and racial-based filters on social media sites are two recent trends that persist. According to the Brookings Institute, houses located in predominantly Black neighborhoods are valued at half the amount of equivalent houses in predominantly white neighborhoods. Also, houses in Black neighborhoods were more likely to have negative equity after the financial crisis of 2008 than white neighborhoods, according to a recent academic study.

What can we do about it? It’s important to remain aware of housing discrimination’s persistence in the face of strengthened laws and protections.  The best thing you can do is report any housing discrimination that you witness to the Fair Housing Board in the State of Virginia’s Department of Professional and Occupational Regulation and hold our local county and city leaders to account for the enforcement of fair housing laws.

Next Silent Witness is September 25th 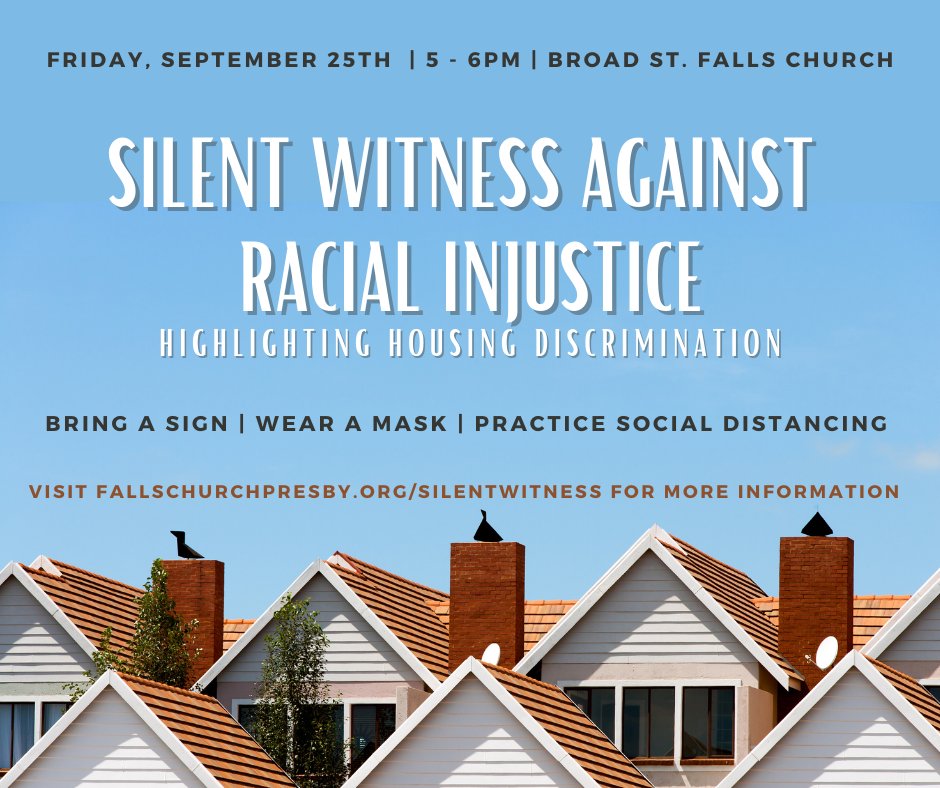 Looking for ways to financially support the fight against racism?

Here are some suggestions from our Justice Ministry Team

What is a “Silent Witness?”
Is it a protest?

A Silent Witness is an opportunity for the faith community to come together, show solidarity on an issue, and amplify the voices of the marginalized.  In essence it is a protest, but it is also a way to leverage our faith community, while focusing on others in need.

What is the Silent Witness Against Racial Injustice all about?

Falls Church Presbyterian Church started the Silent Witness Against Racial Injustice to call attention to the seemingly endless number of police shootings of Black Americans.  We wanted to stand in solidarity with our Black brothers and sisters, to amplify their voices in protest against this violence, and to sustain awareness in the Falls Church community of these issues. We also wanted these Silent Witness events to be ecumenical, which is why we continue to invite the faith community along Broad Street (Route 7) to join us in silent witness.

How often do these Silent Witness events happen?

We schedule these Silent Witness events every 14 days, rain or shine, from 5:00 to 6:00 pm on Fridays.  This gives us time to prepare our social media advertising on the key focus area for the next event.

What kinds of focus areas are you highlighting?

The Silent Witness events focus around issues of racial injustice, but also around significant events in the Black community.  So far, we have commemorated Juneteenth, protested the murders of George Floyd and Breonna Talyor, and reforming the police.  Our upcoming events will highlight the lives of the Honorable John Lewis and Rev. C.T. Vivian, and the disenfranchisement of Black voters.  We’re always looking for new themes and take inspiration from NAACP Fairfax, Black Lives Matter DC, and events across the nation.

It’s OK, we’ve got extra signs for folks.  We’re just happy to have you join us!

Where do I stand?

We prefer that you stand on either side of Broad Street in Falls Church on the sidewalk.  We would prefer to extend our line toward Washington Street to maximize our visibility to passing traffic.

How are you ensuring people’s safety during the pandemic?​

We’ve asked people to wear masks and maintain a physical distance of six to ten feet. We also have “event captains”—look for their fluorescent vests—to keep an eye on every one’s compliance with the guidelines.

How do people react to your events?

So far, we have had a mix of reactions.  Most people honk in support as they pass by.  We’ve also had some negative reactions, but those seem to be fewer.

I still have questions. Who should I talk to?

If you’re coming to a Silent Witness event look for someone in a fluorescent vest. If you’d like more information contact our Justice Ministry Leaders.

Check out this quick recap from our Juneteenth Silent Witness.

Ready to get involved? Join us at our next Silent Witness.